WHAT IS THE DIFFERENCE BETWEEN METAPHOR AND SIMILE? 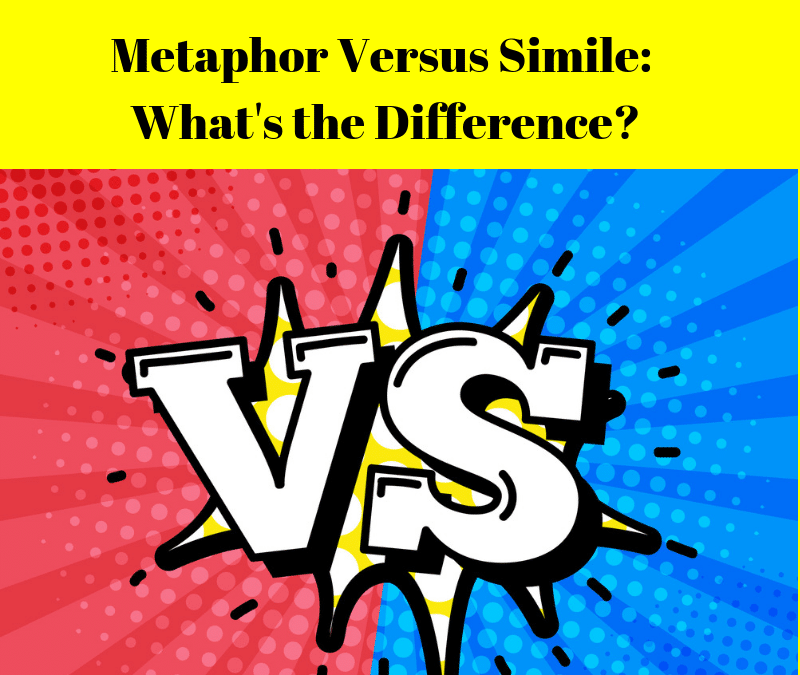 Comparing metaphors and similes isn’t quite like comparing apples and oranges.  It’s much closer to comparing Honey Crisps to Granny Smiths. In other words, there are more similarities than there are differences, but the differences are meaningful.  Metaphors and similes make our writing more persuasive, interesting, and vivid. Even if you don’t know exactly what they are, I’m willing to bet that you use them anyway.  Have you ever said something like, “this pie is heaven,” or “she swims like a fish”? I bet that if you tried to get through a day without using any similes or metaphors, you would have a very difficult time.  It would be as hard as catching your own shadow. Before we go further, let’s go over the definitions of metaphors and similes. I promise that it will be as easy as pie

Simile:  A comparison using the words “like” or “as.” Simile makes a direct comparison.  For example: As cool as a cucumber, or as cold as ice.

Metaphor: A comparison between two objects without using the words “like” or “as.” For example: My sister is a superhero, or life is a marathon.

Let’s start with the similarities.  The biggest one is that they are both used to compare things. Simile uses the words “like” or “as” while metaphor is a more direct comparison, but they both make comparisons.   Simile and metaphor are both elements of figurative language. That is, they are used to make a point in a non-literal way. Figurative language makes common declarative sentences much more interesting, like the salt and pepper of language. In addition to simile and metaphor, figurative language includes hyperbole, onomatopoeia, alliteration and more.

The biggest difference simile and metaphor is the “like” or “as.”  Similes are more obvious because of the use of “like” or “as.” It doesn’t take Sherlock Holmes to figure out that if either of these words is in the sentence, it’s a simile.  The use of “like” or “as” is a big clue that is like a flashing neon sign! If I say this box is as light as a feather, no one is going to think that the box is actually a feather. Instead, the reader (or listener) is able to visualize a box that is very easy to lift.

There are many reasons to use both similes and metaphors.  These devices aren’t just for songwriters and poets. They can be useful in our everyday lives as well as when we write.  For instance, if you want permission to play one more video game, which sentence would work best?

1: I would want to play one more game.

2: This game is like a rocket ship to better hand eye coordination.